You can find the code for download on my GitHub.

With only three days to go for Taylor Swift’s much awaited 7th studio album -aka TS7 aka Lover-, there’s quite a lot to be excited about. And as there’s nothing I love more during the week preceding a Taylor’s album release than listening over and over to all her old songs, I though I may as well go a bit further this time and dig deeper into her previous albums (have I mentioned I’m very excited?). So it’s time to share with you what I’ve been doing for the past few days: a not-so-short tutorial on text analysis and data visualization with Taylor Swift’s lyrics.

To be honest, it all started as way less ambitious project. I had her lyrics on my laptop and I thought I could do a couple of nice pink plots counting words. But this woman inspires me too much, ideas kept flowing and all of a sudden all this Taylor Swift analysis was fully out of hand. To try to keep some order, here are some of the topics I’ll be covering below:

(Kind reminder: you’ll be able to apply this to any kind of texts you want. It won’t be as cool, though)

Are you… Ready for it?

First, of course, libraries. You may want to set your own working directory now if you’re going to save your plots with ggsave.

1. Downloading the lyrics with the Genius package

Getting lyrics from an artist is quite easy in R thanks to the Genius package. I won’t get in detail here about how it works, but you can learn more about it here.

Here, I’m using the genius_album function to download, one by one (not great, I know) her albums. All you need to specify to the function is the name of the artist and the album you want, and it’ll get the lyrics for you. What you’ll get back is a tibble with one row per sentence and information on the track title, track number and song line. Notice that the function won’t return the album’s name, that we’ll need later, so I’m adding it with a mutatecall – happily Genius is dplyr compatible!

You’ll see that I’ve also added a filter call to the Fearless album, as Genius website stores the content of it with three extra songs which were bonus tracks but actually belong to the first Taylor album. I don’t want them twice in there! (shoutout to my friend Nerea who was the one spotting it – swifties can’t be tricked that easily).

After downloading everything, I put it all together in a tibble called tay. Now we have all the data we need! You’ll see that I have also deleted some things after joining – mainly the 1989 voice memos and some acoustic versions, to once again avoid having anything twice (or texts that are not songs).

You’ll notice a save call at the end of this chunk. I added this because retrieving all the data is a bit time consuming, and some times bad things happen, after all. Having it stored avoids having to do everything again and you can just access the data again with an easy loadcall.

2. Tidying up the lyrics

So now we have a tibble with more that five thousand words featuring Taylor Swift lyrics by line. This does not seem very practical, but what would be? The tidy text format tells us that what we need is «one-token-per-document-per-row», with a token meaning, in our case, a word. Luckily, converting our songs to this format is quite easy thanks to the unnest_tokens() function from tidytext, that will take our data frame and split every sentence word by word:

Et voilà! Our new data, tay_tok now has almost 40k observations: one per word, while keeping all the information from the other columns. This is what it looks like:

Notice that unnest_tokens() has also set all words to lowercase and removed punctuation. You can ask the function not to do it, but it’s actually quite handy.

Now that the songs are in tidy format, we can start analyzing them.Let’s do a simple count()call to see which are the most frequent words:

As you can see, this is not very informative. It makes sense that Taylor’s most repeated word is «you», but most of what we’re getting here -pronouns, articles and prepositions- is quite information-empty. Of course these words are very common, but that’s not Taylor Swift-specific.

Luckily enough, tidytextprovides a helpful tool to get rid of these kind of common terms, that in text analysis jargon are called stop words. We can take these kind of words by applying an anti_join() call with the stopwordsdictionary from the package (of course you can use another dictionary if you want, this will depend on your needs). Let’s do this and see what happens to our lyrics now:

This looks much better!! And with her upcoming album being called Lover, I can’t deny that I’m quite excited to see that the word Taylor uses more frequently is not other than love. This deserves some over-the-top plotting to celebrate!

3. Producing bar plots with an image as fill in ggplot: glitter time!

When I was first thinking about this plot, one of my first thoughts was «normal color palettes are not enough for Taylor: I need glitter». During a quite desperate Google search, I got to know that ggplot doesn’t really like this, but that there’s a way out. I won’t get in detail of how this works because luckily for you and me, the ggtextures package has automated this process making it actually quite easy.

All you need to do is find a texture you like -in my case, this was pink glitter, store it (doesn’t matter whether you save it in your system or use a link from the internet) and provide it as an image argument to geom_textured_col(). With that and quite a bit of editing, you can get a nice glittery plot.

All the code is commented, but these two elements may deserve some extra attention: 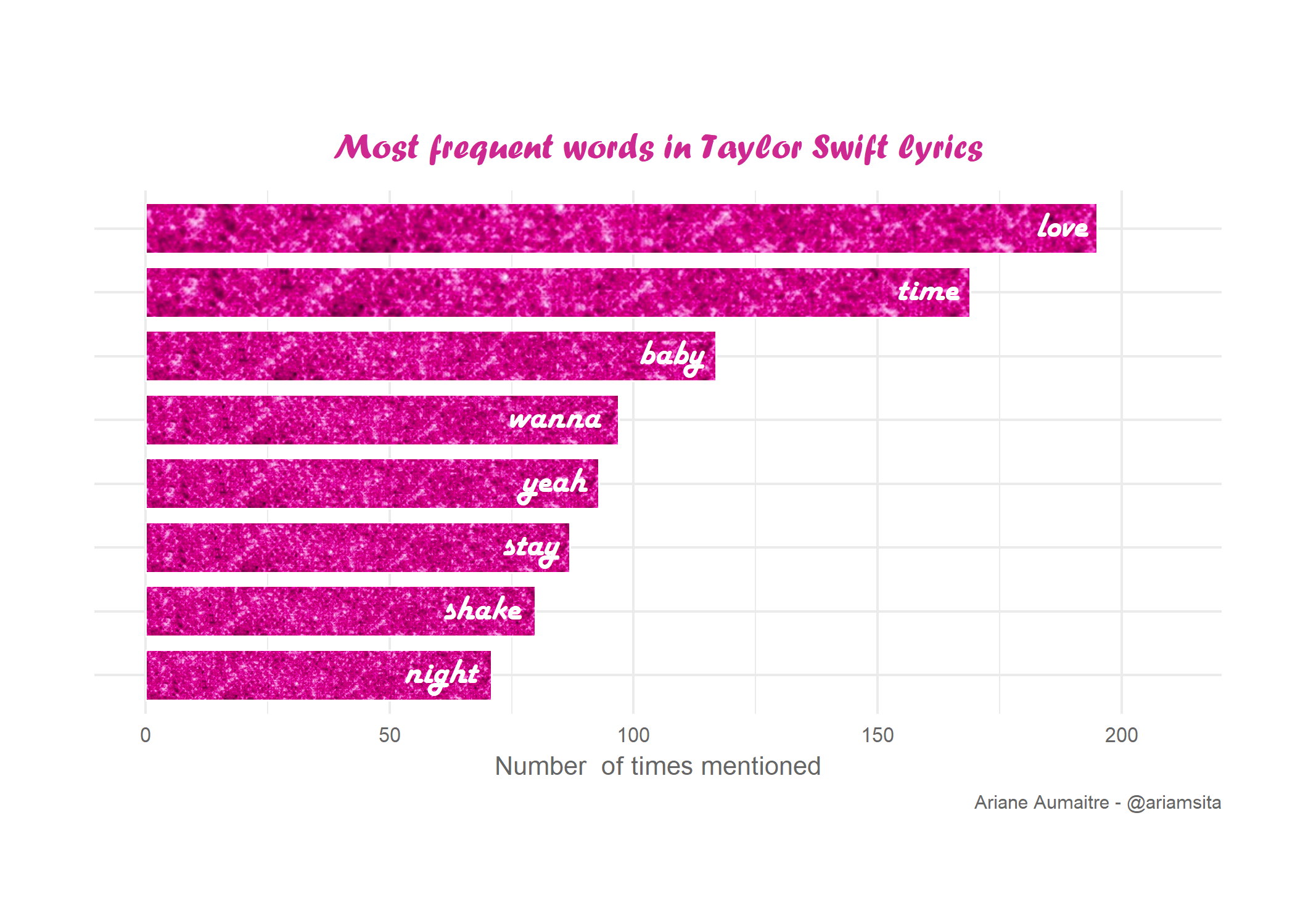 How can we go deeper into analyzing the content of Taylor’s songs with R? An interesting technique to apply here is sentiment analysis. This can be done systematically with the tidytext package thanks to the get_sentiments()function, that provides 4 different sentiment lexicons that can be applied to our data with a simple inner_join.

If this sounds a bit confusing to you, I highly recommend consulting the book linked above – I don’t think I can provide a better explanation than what you’ll find there.

Now we have the data as we want it, we can go and do a nice bar plot of sentiments. Some things I’ve done to make it look nicer: 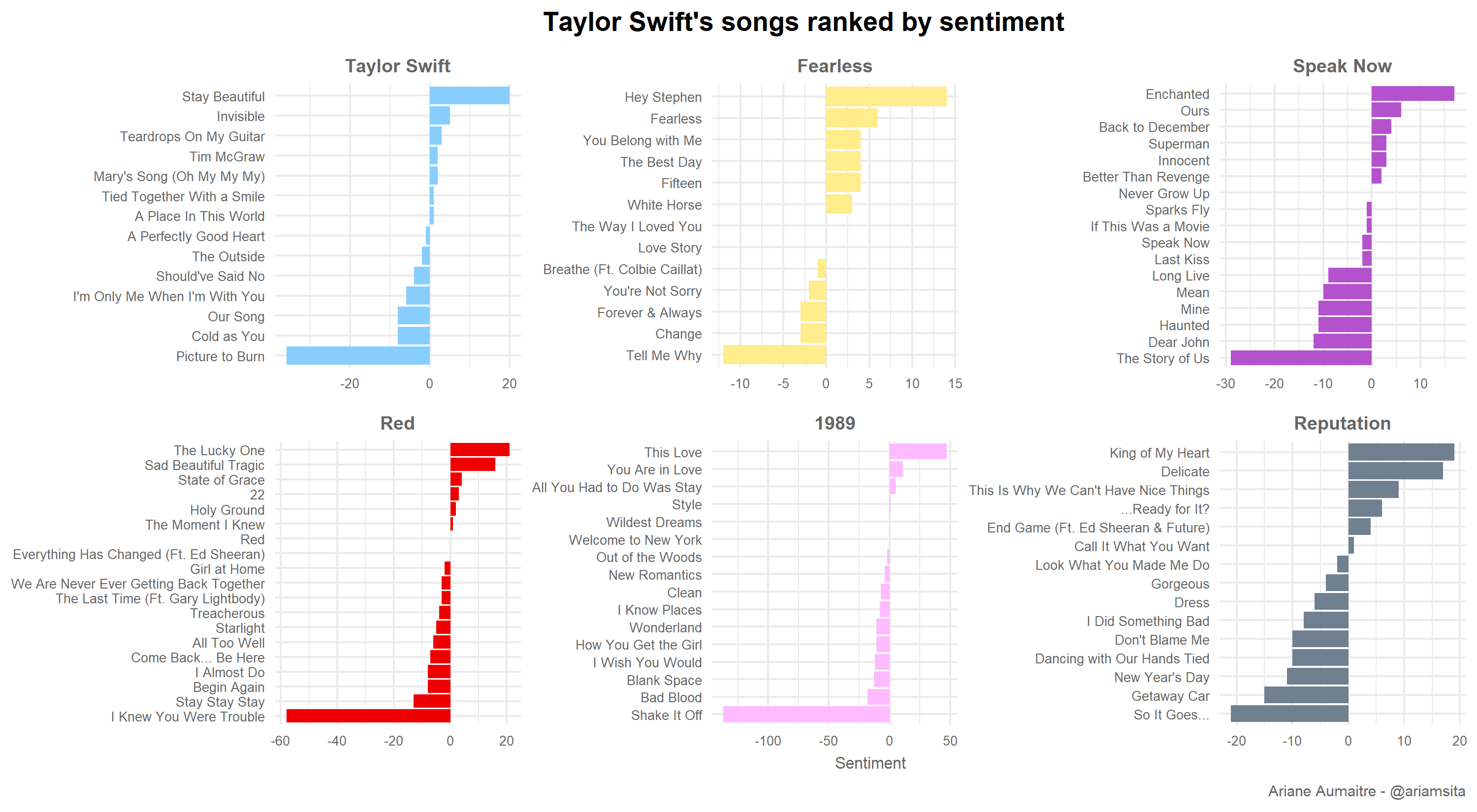 So what is this output telling us? First of all, that we should be careful with sentiment analysis and be always aware of the text we’re analyzing. After all, it’s rather weird to think of Shake it off as the most negative Taylor song… but it does repeat the word hate a lot of times!! («shake» and «break» are also assigned negative values). So check your lexicon well before jumping into conclusions!

5. Checking the relationship among albums

One of the first questions that popped into my mind when I started analyzing Taylor’s songs was how similar her albums were to one another, lyric-wise. After all, Taylor has changed a lot her style during the last 10 years, travelling from country to pop queen. But us Swifties tend to say that even if the sound changes, they’re still the same kind of songs. Is this true?

To test this, I decided to compare word frequency in three of Taylor’s albums: Fearless -full country-, Red -somewhere in the middle of country and pop- and 1989 -full pop-. Three of these albums deserved the Album of the Year Grammy, only two got it. Life is unfair, after all, but let’s not get into that topic.

Once again, I can’t recommend enough the Text Mining with R book if you want to learn how to do this properly. It’s the best reference I’ve found.

To do this, I will create a data frame to get the frequency of words by album. Remember that the aim is to compare 1989 (the pop album) to Fearless and to Red.

There isn’t that much to comment about the plot, but as usual, some remarks: 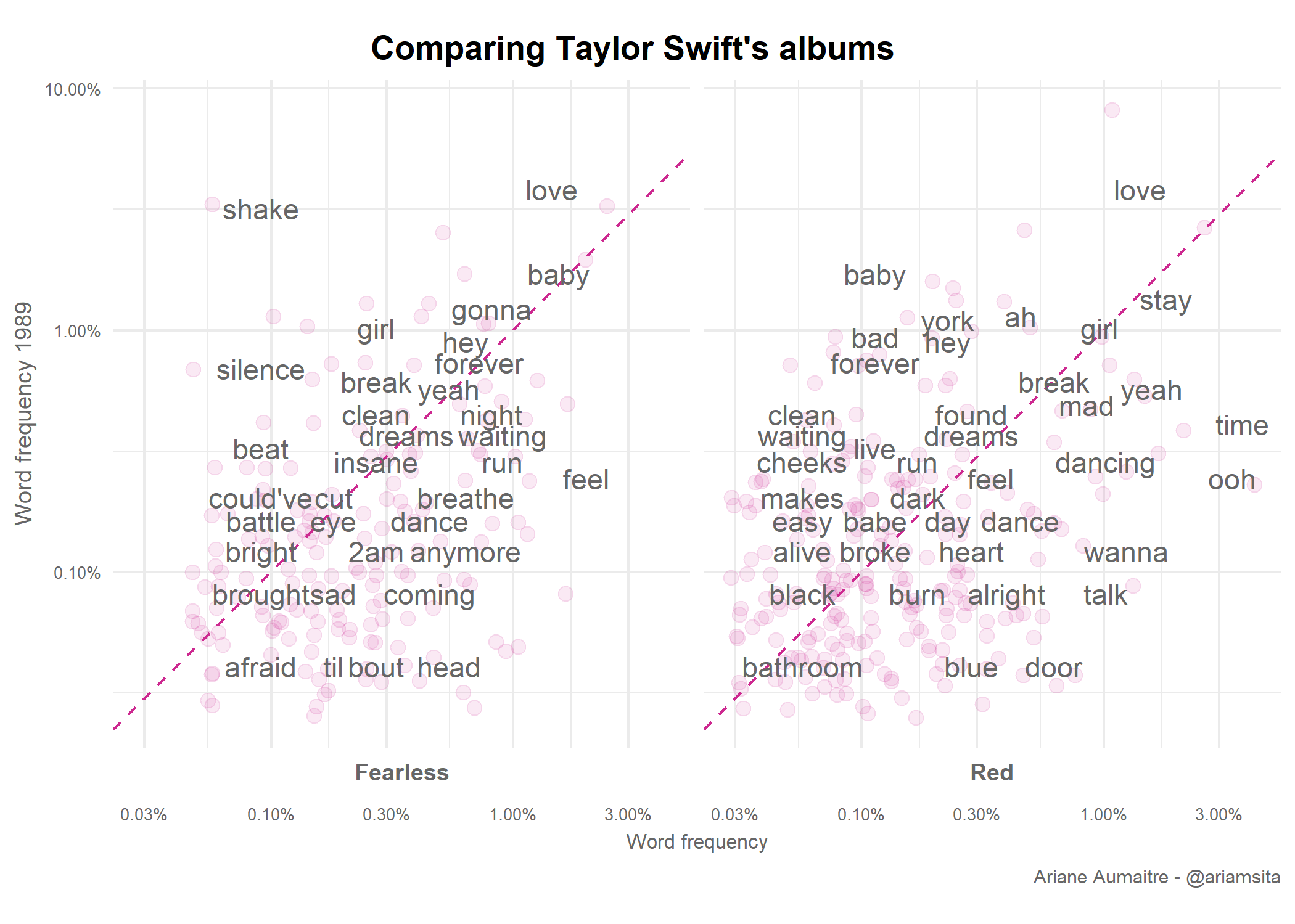 What can we say from this? Well, our girl does talk about love a lot, something that we already suspected. She also spent quite an important part of both Fearless and 1989 addressing a «baby», and a nice share of both Red and 1989 asking someone to stay (but that we knew right? What we don’t know is whether Stay, Stay, Stay and All You Had To Do Was Stay were written for the same person).

Some more album-specific words arise if we look closer. «Shake» was obviously an important word for 1989, as were «bad» and «hate» – (am I getting some Bad Blood vibes from here?) But all in all, a lot of words seem to come together towards the diagonal line, which suggests that topics are not that different across albums, after all.

We’ve come a long way until here. Lyrics have been downloaded, data has been cleaned, words have been counted, glitter has been created, and we have even done some sentiment analysis and looked at the correlation between different albums! But what if we wanted to do one last thing, let’s say… a network map of how songs are related to each other?

Luckily for us, this is quite simple. I’ll start by creating a last data frame, one that takes all songs and applies the pairwise_cor() function to all of them by comparing the words they contain. This will return a long df where we’ll be able to find every pair of songs and their correlation. It’s just two lines of code:

We could map this as a huge heatmap (I tried to do that), but with so many elements it’s almost impossible to produce anything barely nice-looking.I think that a better solution is to go for a network map to see how songs are related to each other. This can be done with ggraph with the code below: 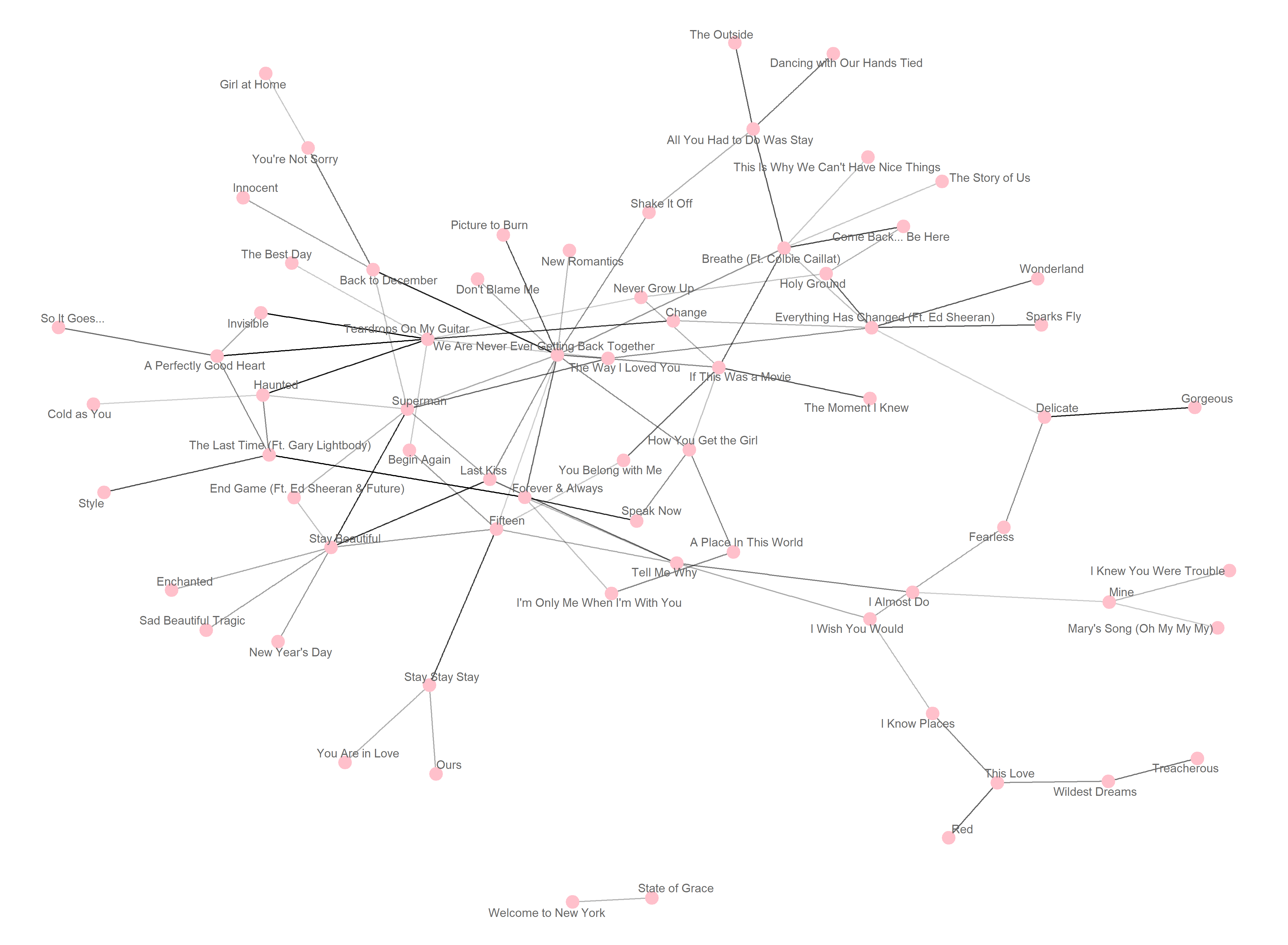